SK Films is pleased to announce that filming was completed on location in Mexico for SK’s upcoming release for IMAX® and other Giant Screen theatres worldwide.

EL ROSARIO, MICHOACAN, MEXICO, March 9, 2012: SK Films of Toronto is pleased to announce that filming was completed on location in Mexico this week for Flight of the Butterflies 3D, SK’s upcoming release for IMAX® and other Giant Screen theatres worldwide. Mexican President Felipe Calderon visited the set on the last day of filming in the monarch butterfly sanctuary at El Rosario in the State of Michoacan, his home State. His Government and the States of Michoacan and Mexico, are supporting the production and promotion of the film. 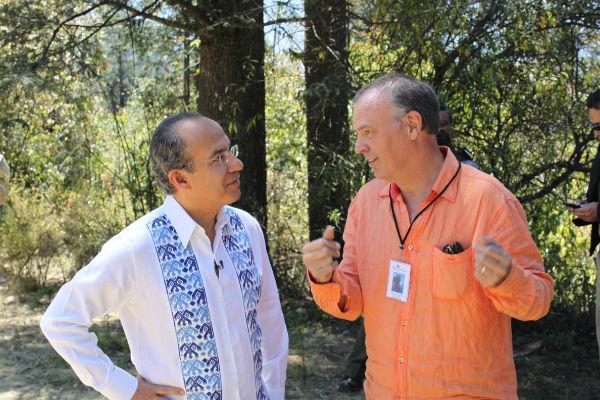 This epic natural history story of the monarch butterfly migration was filmed over a year-long period to match the annual migration cycle of the monarchs from Canada, down the U.S. to the remote volcanic mountains of the Sierra Madre Occidental mountains in Mexico and back – the longest insect migration on earth. Shot on location in Toronto, the U.S. and in Mexico, including in the monarch butterfly sanctuaries that were discovered in 1975, our extensive 3D crew was granted permission to film in these now protected and ecologically delicate mountain areas – now a UNESCO World Heritage Site.

The natural history story is interwoven with the scientific detective story of Dr. Fred Urquhart, spanning 80 years from Fred as a curious young boy wondering where the monarchs went each year, to his looking back as an older man on his scientific life of discovery. In terms of period authenticity, our research team and award winning art department undertook meticulous planning in spanning the 80-year time period. The Mexican scenes include local villagers who participated in the Day of the Dead celebration in an existing graveyard, recreated in detail as it was in 1974. Our close-up/macro photography work was undertaken in collaboration with Oscar winner Peter Parks. Canadian icon and revered actor Gordon Pinsent plays Dr. Urquhart and his wife Norah is played by distinguished Canadian actress Patricia Phillips. Shaun Benson plays the dynamic and adventurous Texan, Ken Brugger and his new Mexican bride, Catalina Aguado Brugger is played by rising Mexican star Stephanie Sigman.

It is impossible to describe what it is like to see hundreds of millions of butterflies swirling and floating about, millions more roosting on every available tree trunk and drooping branch in these enchanted forests. There is complete silence except for the sound of millions of fluttering wings. The air is rich with the fresh

scent of the ancient oyamel fir trees. As our actors universally state in the Behind The Scenes interviews about their experience being in this magical place, they were overwhelmed and felt apart of something both spiritual and scientific. The entire cast and crew all share the desire to protect the migratory routes and sanctuaries of these magnificent creatures – a desire shared by the Mexican Federal and State Governments.

The film is an international co-production headed by veteran 3D producer Jonathan Barker of SK Films, with the U.K.’s Mike Slee (SK’s previous release, Bugs 3D!) directing and writing, along with co-writer Wendy MacKeigan. Mike Slee and Rafael Cuervo are the U.K. and Mexican co-producers.

Many of the words of Dr. Urquhart in the film are from the famous 1976 National Geographic article published shortly after the discovery, from his subsequent book and from extensive radio interviews. The only surviving member of the discovery team, Catalina Aguado Trail, has provided the team with rich and detailed information about her time with the Urquharts and her search with Ken, as well as guidance to the actress portraying her.

The project has major financial support from the National Science Foundation, with our extensive Educational Outreach Program being created by our education partner The Maryland Science Center with the participation of The Smithsonian Institution’s National Museum of Natural History. The world’s top monarch butterfly experts, including Dr. Chip Taylor, Dr. Karen Oberhauser and Dr. Lincoln Brower, are serving as our scientific advisors.

Additional support has come from two of the most important companies in Mexico – Coca-Cola FEMSA, and Grupo Bimbo (the world’s largest baked goods company).

It is important to the production team and the film’s funders that a significant portion of the profits go towards monarch butterfly conservation through Mexico’s most significant conservation organization, Fondo Mexicano para la Conservacion de la Naturaleza.

Flight of the Butterflies will premiere in September of 2012. Additional release details will follow.

About SK Films: SK Films Inc. is a Toronto-based, multi-platform entertainment content provider and a leader in 3D film production and distribution. The company was founded in 1998 together with the late Robert Kerr, the visionary co-founder of IMAX Corporation.